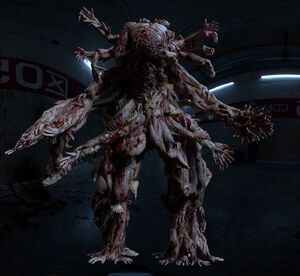 The Zygote is a type of lifeform and main antagonist in Oats Studios' 2017 short film under the same name.

The Zygote is shown as a very large lifeform, standing around nine feet tall in its current state. Its entire mass is made up of Human and alien cells: its "legs" are a fusion of several arms and legs of its victims, and while one "hand" sprouts into several different hands, the other hand is made into a spear-like protrusion to attack and kill its victims. Several hands and arms are sprouted from its body, and the "head" is made up of numerous eyes. Although it seemingly has no mouth, it is able to make a human-like screech.

It's implied that 97 Humans are currently apart of its physical body mass by the end of the film, and with each Human its extracts it becomes more intelligent, as it also extracts the knowledge and memories of its victims as well as their physical anatomy.

According to the Behind-The-Scenes look into the short film, the Zygote first appeared on Earth during years 2040 and 2050, when a set of massive meteor strikes decimated North America (parts of the USA, into Canada and the Arctic Circle), bringing with it alien materials and metals, and supposedly the Zygote as well.

Retrieved from "https://aliens.fandom.com/wiki/Zygote?oldid=182461"
Community content is available under CC-BY-SA unless otherwise noted.