Alien Species
Register
Don't have an account?
Sign In
Advertisement
in: Doctor Who Universe, Sapient Species, Invaders to Earth,
and 10 more 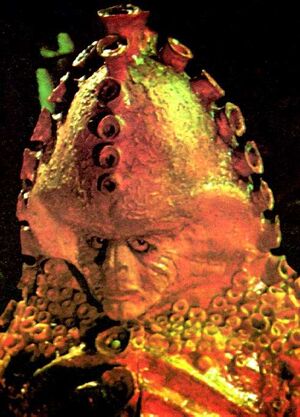 The Zygons are a sapient species from a now-destroyed planet which travel in refugee ships in search of a new world. They have long mastered technology that combines cybernetic and biological elements, and travel along with non-sapient reptilianoid cyborgs known as Skarasens, which are domesticated and produce a lactic fluid on which the Zygons are depended to live.

Many centuries ago, a Zygon ship fell in Loch Ness, in the Scottish region of Earth, where the aliens remained alive but isolated for eight centuries; and their Skarasen became the origin of the Loch Ness Monster stories. In 1975 the beast, having traveled to the North Sea on the Zygons' orders, started to attack oil rigs, bringing the attention of UNIT and leading Brigadier Lethbridge-Steward to summon the Doctor to investigate. The Zygons then proceeded to attempt subversion and enslavement of humanity, seeking to use them as slave labor in order to xenoform the Earth into a close copy of their former homeworld.

The Zygons' most notable achievement is perhaps the body-print technology, which allows them to assume the exact form of other creatures as long as the originals are kept alive but unconscious in their body-print apparatus.

They physically resemble robust humanoids, with bodies shaped like a flattened banana and no discernible neck. Their skin is rough and reddish-tan in color and they are easily recognizable by their three rows of suckers that run along their heads, bodies and limbs. Their hands are equipped with poisonous barbs which can sting victims and leave them unconscious. The Zygons speak in characteristic voices which resemble a deep harsh whisper. They are able to survive in the Earth atmosphere with no visible life system technology; but do mention that their original homeworld was many degrees hotter than Earth and had a different mineral composition.

Nearly all Zygon technology, from starships to hand devices, is of biological origin. They are most notably able to assume the form of other creatures, keeping the originals alive but unconscious in a body-print receptacle. They have modified a native beast from their homeworld into a cyborg creature called the Skarasen, which produces a lactic fluid which plays an important role in the Zygon nourishment. The Skarasens can also be summoned at distance by their Zygon masters using a device called the trilanic activator. The Zygons are technologically advanced enough to be capable of xenaforming other planets to become more suitable for them; however the process is slow and requires many years of laboring, performed by the enslaved natives of the planets they seek to conquer.

Broton, the Zygon commander, calls for a fleet of refugees of his own people to come to Earth, but it is stated that they will take centuries to arrive; time enough for the local Zygons to enslave humanity and xenoform the planet. While Broton and his group were defeated by the Doctor, and the local ship was destroyed; no mention is made of what happened to the incoming fleet afterwards. Among the many theories, it could be assumed that they did arrive on Earth centuries later and found Humans not only as still masters of their own planet, but also possessing highly advanced technology; and then either attempted to conquer Earth anyway and were driven out of it, or opted for more peaceful procedures. Another possibility is that they gave up on the planned invasion as soon as they lost contact with Broton's group.