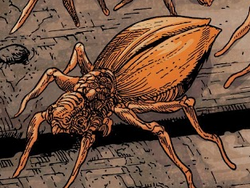 Retroworlds
The Zycha are an insect species native to the Land of Wind on the planet Vaeoya.

A small six legged orange insect with acidic green fluids that can dissolve even metal. According to the humans native to Vaeoya they have many uses, though the religious conservatives such as the Jacris Cult ban their sale. These insects fly in swarms and are said to hunt massive beasts such as the Wind Serpent