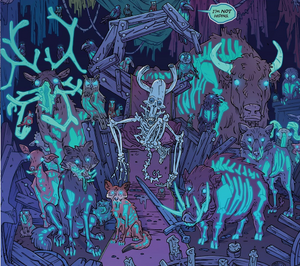 Zurok the Many was an alien parasite criminal that was imprisoned aboard an D’Givani prison ship.

Presumably a member of Slarpax's alien army, he was captured and imprisoned in a containment unit. However while transporting the prisoners, the D'Givani fleet ran into a cloud of rocks. The fleet crashed unto Earth in 956 AD, during the middle ages, in what would be northern Europe.

Zurok's container was ejected during re-entry. The Vikings from Bordiem led by Lord Jarl Gisli managed to find the containment, thinking it was treasure. Zurok however was discovered and the Vikings attacked him, beating him and cutting him chasing him into the woods where he perished from the cold.

Though his body was dead, his mind was not. The local wildlife, fed upon his corpse, and in doing so he possessed them. Demanding revenge, Zurok used his many hosts to attack Bordiem, killing the Vikings and claimed the region for his own.

When Hrolf and his comrades arrived to seek aid from Lord Gisli they discovered Zurok's pile of human skulls as a warning. He attempted to drive them out using his thralls, but the young heroes advanced until they reached Bordiem.

There the surviving D'Givani Fordi used a device to entrap Zurok's remaining essence into a machine which was later destroyed by Sveni. Zurok's essence gone the wildlife returned to normal.

Zurok was an alien creature that could force the will of animals to his command. Animals that ate his body allowed him to gain control of their motor functions and possess him. He was able to manipulate multiple bodies to his command.

Retrieved from "https://aliens.fandom.com/wiki/Zurok?oldid=173160"
Community content is available under CC-BY-SA unless otherwise noted.