Alien Species
Register
Don't have an account?
Sign In
Advertisement
in: Sapient Species, Hostile Species, Invaders to Earth,
and 4 more 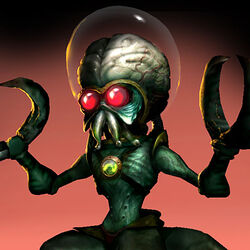 While unclear of its creation, it is stated by Incognito Entertainment that prior to the events of the game, Zorgulon was to be the king of the alien invasion, but during his reign he became addicted to radiation waste. He came down to Earth in order to find fuel for the alien spaceship, and apart of Cerebulon's force to conquer Earth.

It is a giant alien lifeform. It has an exposed brain, protected only by its space helmet casing. Its arms end in crab-like pincers, and it has two sets of legs, giving it a Centaur-like anatomy. Its suit extends around its legs, with a strap around its chest with a energy-filled buckle at its center. It also has a respirator over its mouth as it can't breathe in Earth's atmosphere.

Zorgulon itself has a number of high-tech weaponry in its arsenal, most of which are used for combat against other giant monsters. Amongst these it has a set of robotic arms ending in electric clubs, and a "small" alien pistol for quick-fire attacks. It also has a homing beacon for UFOs to track and attack its opponents with during a fight.