Alien Species
Register
Don't have an account?
Sign In
Advertisement
in: Humanoids, Invaders to Earth, Sapient Species,
and 8 more

The Zorg Species is a sapient species from the planet Zaion. Only one member of this species has been discovered so far, his name is Zorg. 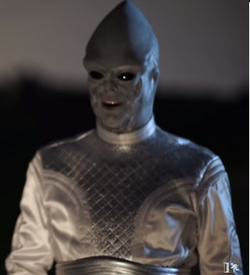 They are practically the same as humans (physically speaking), they have two arms, two legs, a trunk and a head. Some differences can be noticed, such as the shape of your head, which has a pointed shape at the top. They have gray skin and apparently have no ears (as much as they can hear and understand speech), have completely black eyes and do not appear to have any kind of hair on their bodies.

Its technology is extremely inferior compared to ours, but extremely similar when compared to ours in the 80s and 90s. When Zorg arrived on Earth, a type of slingshot to defend himself, Zorg also said that his planet's means of communication was by cable phone, they also don't have internet, instead they have book encyclopedias, where one of them goes from house to house selling books. Their means of transportation are also similar to ours in the past, using a species called Blorg, where they tie chains to their mouths, chains that are attached to chariots. Apparently they still don't have electricity and consider it a legend. The means that Zorg used to get here, he said: “I came in an air ball! Who brought me, she lifts a layer like this, complex, she takes me inside a straw container ... And she takes us like that you throw fire, spit fire, like a dragon and take us up high. He also claimed that this mechanism that took him here was similar to a balloon. He also stated that they have typewriters, said that they just invented “carbon paper”, and that they still don't know what rubber is.