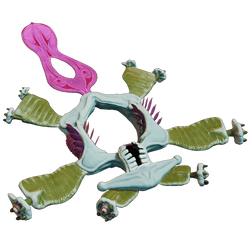 Eternal Cylinder
The Zooshgarg is an exceptionally efficient predator with, as the Trebhum themselves often told, a fondness for Trebhum meat.

The Zooshgarg's anatomy consists of a flattened, ringed body with several limbs acting as wings for hovering over the ground. At the end of each of these limbs are sets of eyes it uses to scan the ground under it. It has a long, flattened tail behind it, with a hammerhead-shaped head at the front. Zooshgargs fly much higher than any other flying creature and are not outrunnable. However, it is easy to get out their path.

The Zooshgarg has a strange but effective way of hunting. It is able to use antigravitational energy to generate a vortex below it, sucking up small organisms inside. After, it grabs the helpless prey with its long tongue and pulls them into its mouth at the back of its head.

The Zooshgarg seems to be immortal in the game, as flies very high and is able to go through the Eternal Cylinder.

According to folk tales told by the Trebhum, this creature seems to be a supernatural predator.