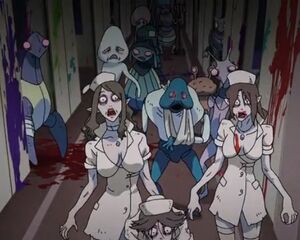 Space Dandy
The Zombies are a multi-species collection of shambling undead creatures afflicted by a zombifying condition which can be transmitted by biting. Curiously, even robotic species are susceptible to being turned into Zombies, as are all other races in the galaxy.

No matter from what species they originated, Zombies are pale-skinned, slow-moving, and speak in their own particular language (which sounds like a series of slowly-pronounced "ah"s and "uh"s). They have a craving for raw meat, but can also feed on yogurt. They infect other creatures by biting them, turning them into Zombies as well.

Despite their bodies' lifelessness and their being physically altered, zombified individuals ultimately retain a lot of their original personalities, and are perfectly capable of going on with their lives despite some difficulties. Many of them sustain themselves with the life insurance money that they're usually able to collect, given that they are biologically dead. For some time, their existence was threatened by professional Zombie Hunters, paid by the insurance companies to hunt down and destroy Zombies (which is technically legal since they're already considered dead).

Fortunately for the Zombies, these Zombie Hunters were eventually turned into Zombies themselves and, following the rapid zombification of every living thing in the universe (mechanical and biological alike), came an era of universal peace and prosperity, where war and discrimination no longer existed since every citizen was equal in a fully zombified society.

Retrieved from "https://aliens.fandom.com/wiki/Zombie_(Space_Dandy)?oldid=150295"
Community content is available under CC-BY-SA unless otherwise noted.