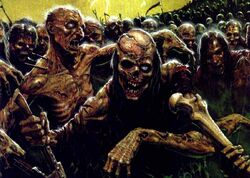 Dependent on the writer (usually Earth)

Depending of zombified creature

Undead
Immortal (unless their brain is destroyed)

Assimilation via biting and scratching

Depends on the universe

Assimilation via biting and scratching

Various
A Zombie is a re-animated corpse, or simply someone infected usually brought back to life by an alien parasite or bioweapon. "Zombie" (also spelled "Zombi") used to refer to a corpse possessed by a voodoo snake-demon under a witch-doctor's control and kept in rather good condition; however horror films have changed the meaning to mean any creature that rises from the dead for whatever reason, shambles about, rotting on its feet, and eats living members of its species. The Zombie legend are often confused with several other undead legends, including Ghouls ([Arabia] Bite turns the victim into another one, cannibalistic), Anthropophagei ([Europe again] travel in hordes, also cannibalistic) and Revenants ([Europe], return from the dead to punish the living). Usually, the only way to kill them is to destroy the brain, as decapitation often results in a semi-living head.

Clinical death means that all cardiovascular and respiratory functions-breathing and blood flow, irrespectively-have ceased. Once this happens, the immune system shuts down, eliminating resistance to parasitic organisms and leading to decay. Brain damage occurs due to the buildup of toxins, and skin and muscles putrify due to the bloodstream neither feeding the tissue nor carrying away its waste materials. This dead, rotting state is a prerequisite to becoming a zombie, rather than simply being a person taken over by assimilating races.

Due to being mindless, the zombies were immune to being possessed by the Ectonurites.

Most zombies walk slowly and some can run.

The Majini Undead can sprout flower like tentacles from their mouths that allows them to dig and grab their victims.

The Las Plagas Undead were intelligent and were able to use weapons and can drive vehicles.

The zombies can be easily destroyed by getting their brains shot and stabbed.