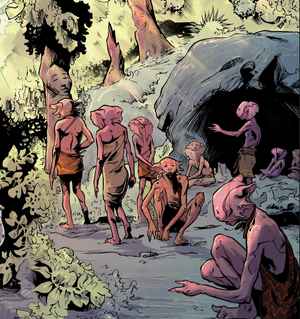 The Zoja are an alien species from the world of Zojaqan.

Originally evolving from a small hairless rodent-like creatures that lived in underground dens, they later developed into bipeds that live on the surface. The Zoja are pink skinned creatures, about four to five feet tall. The most notable feature is their large ear flaps. Males tend to be sharper and more angular while females more rounded. According to Shannon Kind the Zoja are herbivores.

The Zoja were the first forms of life found by Shannon Kind when she miraculously appeared on Zojaqan. In order to survive she fed on the creatures to sustain herself on the planet and were a staple to her during her series of time displacements. She eventually emerged at a time when the little creatures she hunted for food became a small, but potentially sentient race.

Taking pity on them, especially after seeing their helplessness in the unforgiving world, Shannon decided to protect the creatures as her children. During the time before she was spirited through time, she took care of a pair of Zoja. When she reappeared she refound the pair and saw that they had created a tribe and centering their way of life around her image, as a deity.

The Zoja groveled before her, only for Shannon to lift their heads and bow before them to show them humility. She taught the early Zoja how to make weapons, how to hunt and to protect themselves. Using her street experiences of her youth she taught them about strength and confronting adversaries.

Sadly when Shannon emerged once again into the future, she found that the Zoja had misinterpreted her teachings, using strength as a tool to subjugate the weak. Disgusted of that her work had taken a perverse form, Shannon viciously attacked her children, killing the leaders and maiming one. In the aftermath she told them that strength was not just a gift but a responsibility, the justness of their actions, and that murder was a sin. She warned them that she would not always be there to protect them and asked them to be good.

The Zoja are a tribal society. Originally taught by Shannon Kind or Shan, who they identified as a goddess. However despite their adulation of the human, they understood that Shan was not all powerful and that the future was unknown to her as it was to the Zoja.

They were given a set of teachings which the refer as the Shan Laws.

These laws convinced that the Zoja were a chosen race touched by Shan. They declared that all creatures who hunted Zoja would hunted by them. Stories of strength are revered as they emulate the tales told by Shan of her street experiences.

However after Shannon returned of another of her time jumps, the Zoja had convoluted her teachings. To them strength was a tool to flaunt their dominance of the land. The Zoja had subjugate the weak members of the tribe and hunt down the helpless and weak predators. Murder was seen as a justified excuse to kill the weak. The creatures they hunt not for food but for sport and their carcasses burned, used as a warning to those who hunt Zoja.

Retrieved from "https://aliens.fandom.com/wiki/Zoja?oldid=173158"
Community content is available under CC-BY-SA unless otherwise noted.