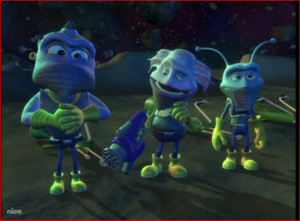 They all appear to be reptilian humanoids with blue or purplish skin and different cranial organs: horns in Tee's case; antennae in Travoltron's case; and membranes in Zix's case.

The space bandits trio has committed numerous acts of theft throughout the galaxy, and employed techniques of deception to acquire what they want. They attempted to trick Human child prodigy, James Isaac Neutron, and his friends out of the astro-rubies that they had excavated by telling them about "ruby madness", an alleged mental state provoked by greed that leads one to do anything to guard their horde.

After the McSpanky's restaurant building flew into space, it was salvaged and commandeered by the trio, who turned it into a functional space vessel.

They made a cameo appearance on the intergalactic game show Intergalactic Showdown, hosted by Meldar Prime.

They were sighted again after an incident involving Jimmy accidentally shrinking everyone in Retroville. Upon realizing that the inhabitants of the city were now much smaller than regular Humans, the alien bandits planned to sell them as toys to children of other species. This plan was foiled thanks to the efforts of Jimmy and his friends, who exploited their miniature state to pose as the aliens' consciences and manipulate them into turning against each other. Jimmy's friend Carl Wheezer in particular used his ventriloquism skills to successfully pull off the trick.

The three aliens met Jimmy one final time as part of an organization called the League of Villains: assembled by the Yokian ruler King Goobot and also including numerous Human criminals and the alien known as the Junkman. Goobot's goal was to unite their forces to defeat Jimmy once and for all, and the role assigned to Zix, Travoltron and Tee was to seal Jimmy's lab with a green viscous substance, thus preventing him from accessing the lab's resources. When Jimmy and Sheen were made prisoners in the Junkman's ship, Tee was tasked with guarding them. This, however, led Tee to switch sides as he befriended Sheen, who convinced him to come with them as they escaped.

In spite of his betrayal, Tee still considered Zix and Travoltron as his friends, and asked Jimmy to save them when the duo was threatened by a snake. Even after being rescued, the two refused to change their ways until Tee managed to convince them that they didn't need to be evil, and had no reason to be literally in league with villains. Eventually, they took Tee's words into consideration and repaid Jimmy by saving him from a dinosaur, telling the beast to go after Baby Eddie instead. Now aligned with Jimmy's group, the trio cut their ties with the League of Villains and helped to defeat them. Sam Melvick invited them to his Candy Bar, where Zix offered to pay for the milkshakes.