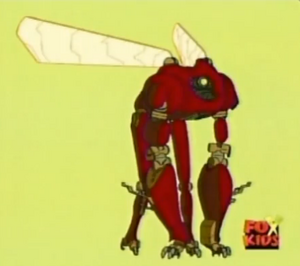 The Zingkal are a race of giant mechanoids.

While not necessarily hostile towards other species, the Zingkal do not see organics as equals, though they are respectful to their robotic counterparts. However, they hold very little tolerance towards robots that experience emotions, seeing them as corrupt, such as the Neo-Cateri.

They Zingkal possess a unique technology called the bio-mech disruptor, a weapon that can essentially wipe away all bio-mechanical essence.

The Zingkal were created by an alien species called the Cateri, as a defensive weapon. However due to a programming error the Zingkal rebelled against the Cateri and eliminated them. However their purge of the legacy of their former masters was not complete. Eons later some Zingkal modified themselves with biologically driven programming, assuming the Cateri, creating a new race called the Neo-Cateri.

The Zingkal, seeing these divergents as aberrations, sought to destroy them, forcing the Neo-Cateri to flee their homeworld. The Zingkal tracked the Neo-Cateri to Earth but the assassins were thwarted due to the intervention of the Big Guy and Rusty.

Retrieved from "https://aliens.fandom.com/wiki/Zingkal?oldid=168633"
Community content is available under CC-BY-SA unless otherwise noted.