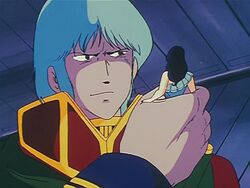 The Zentraedi are a mysterious, militaristic warrior race - or, to be precise, specifically the males of the species, as their species is segregated by gender. Females are instead known as the Meltrandi.

Strangely enough, the Zentraedi are exactly like Humans, except for the presence of proto-culture. When this is extracted from their bodies, they shrink to 5'4" (~ 1.62 m), and their skin changes from green, purple, or pale white to Caucasian skin tones or brown.

They are cloned, so as to control them better. They are brought up to regard sexual breeding as at least disgusting, if not extremely dangerous. A group of them who have not been freed from their restrictive culture will run in fear from an infant when it is described how they come to be, which is quite humorous to watch.

They speak English quite fluently and require no training to communicate with Humans. They also have their own language, probably used to relay top-secret information between one another.

Their military is highly developed, as their entire culture is programmed for war. They were engineered by the RoboTech Masters as proxy warriors (like mercenaries, but not paid).

As they are a warrior race, they are likely to enjoy the (rather noxious) standard-issue MRE's. They will break out meat and wine for special occasions.

The Zentraedi were engineered for combat by the Robotech Masters, the first race to use Proto-culture as both a mutagen and a power source. They were placed under command of the Supervision Army, whom they eventually slaughtered, and chased their last remaining personnel and ship to Earth. Contact with Humans eventually led to them gaining a culture other than "Go here, kill that, leave", and led to the discovery that they could breed with Humans. After a time, they became more or less completely assimilated into Human culture. When one of their enemies, a crustacean-like hive organism known as the Invid attacked Earth, they leaped to the defence of their adoptive home-world.