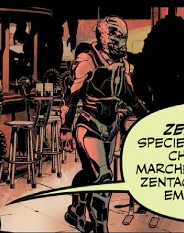 The Zentacs are an alien race that appear in the Faster Than Light Universe.

The Zentacs are humanoids, their faces wrapped in what appear to be bandages.

A group of Zentacs were present at a bar in the Angelus Tube.

A bad-tempered race, they used to rule a good chunk of the Rimward Marches, creating the Zentac Empire. However they lost their empire to one of their slave races.

Retrieved from "https://aliens.fandom.com/wiki/Zentac?oldid=182019"
Community content is available under CC-BY-SA unless otherwise noted.