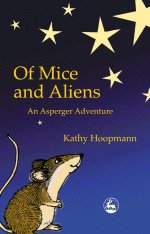 Zeke Martian is an extraterrestrial that appeared in the book Of Mice and Aliens: An Asperger Adventure - a children's book by Kathy Hoopmann.

His name is given to him by the book's protagonists, Ben and Andy, as his real name is unpronounceable in English. His species are known as Huubble Snitz.

Physically, Zeke is described as been grey in colour - with a round 'blobby' body, a balloon-shaped head and eyes on the ends of long feelers. Zeke's legs (four in total) are said to be smooth, long and thin - looking like jelly - with four suckers on its feet.

In regards to his abilities, Zeke is shown to be a reasonably fast learner, as he learns English overnight after listening to both the TV and Radio at the same time. However, he shows several traits similar to Autism/Asperger Syndrome as a result of his inability to relate to humans and his lack of knowledge on Earth's rules and norms. This includes misunderstanding things such as sarcasm and expressions, not understanding instructions (appearing to be disobedient as a result) and been blunt to the point of rudeness (although this is unintentional). His more notable ability, however, is his ability to shape-shift - with his appearance becoming a combination of two human boys (Ben and Andy) in order to blend in.

Zeke travels in a spherical silver-colored ship. It is made from smooth metal, with a sharp edge around the outside that glows with faint light pulses. One side of Zeke's ship is slightly crushed with the lights broken - due to colliding with an asteroid in the Ornicle System. However, Zeke does not consider the damage to be major.

Zeke (not his real name) is a member of a surveyor ship from Celesstis 4, which is exploring the Solar System (known as Urssus to his people). He is sent with others on an assignment in order to gather four items - clothing, an energy source, sustenance and an information storage device - within a set time period in the hope of winning an award for retrieving the items. The planet Zeke visits is Earth (Urssus 3) while others of his species visit the other planets in the Solar system to search for the same items. The Surveyor ship, meanwhile, remains hidden behind Jupiter.

Zeke lands on Earth - moving too fast to be seen by telescopes and with his ship been too small to be detected - before landing in a gulley in a back garden. Zeke remains on-board his craft until it's discovered in the afternoon by two boys - Andy (a tall boy with a love of sport, in particular basketball) and Ben (a boy with Asperger Syndrome who has a love of computers and sci-fi). Zeke emerges from his ship, but is startled and flees back inside when Ben speaks to him. He emerges moments later, but having shape-shifted into a human form with Andy's body and Ben's head. With some help from Ben, Zeke shape-shifts into a different form with a mix of both Ben and Andy's physical traits. Although Andy is scared and worried about the alien's true intentions, Ben is much more trusting - even though the alien is currently only repeating what others say.

Due to misunderstanding what the alien says, the boys think he is called Zeke - with the name sticking. As Zeke watches cartoons on the TV in Ben's house, Andy reminds Ben that they don't know Zeke's true intentions and to be careful around him. Leading Zeke out of the house using a portable television, Ben leads him back to his ship - with the hope the batteries in the television last the night. Listening to the television and also to the radio, Zeke learns English overnight. When Ben comes to see him in the morning, Ben remembers what Andy tells him when Zeke tells him to come aboard to talk about something he needs help with, and instead convinces Zeke to come to school with him.

At school, however, Zeke unintentionally gets into trouble - mostly due to his lack of knowledge on Earth's rules and norms. This results in him been unintentionally rude to a few teachers (such as telling Mrs Peters that her shoes smelled) and misunderstanding an instruction from the headmaster. During morning tea, Ben and Andy talk to Zeke about the morning's events - as well as Ben telling Zeke about how due to having Asperger Syndrome, he also finds people hard to understand. Upon learning what Aspergers is, Zeke questions whether Ben is an alien as well - with Ben replying that he isn't, but sometimes feels like one as a result of struggling to fit in.

Ben later gets into trouble himself, due to a moment of getting upset and angry beyond his control (as a result of his computer lesson getting replaced with a team sport session - which he hates the most) and hitting a girl in the class (not realizing what he was doing). Talking with Zeke later, Ben and Andy learn about the Surveyor ship hidden behind Jupiter, as well as what Zeke has come for as he gives them a list of what he needs before he leaves the next day:

As Andy leaves later to go and play sport, Ben and Zeke meet up with Ben's friend Lisa Flint - who also has Asperger Syndrome and a love of mice and poetry. She learns from Ben about Zeke been an alien, as well as letting him hold Paddy (one of her pet mice who she had sneaked into school with). At the end of the day, Zeke returns with Ben to his house - with Ben helping gather the necessary items for Zeke, although he mistakenly assumes that the items are for fixing Zeke's ship. Furthermore, Ben later gets into trouble due to the items he has given to Zeke (which included one of his Grandma's chocolate cakes, one of his Dad's work shirts and a video tape belonging to his stepmum Sue).

Hearing Sue and Ben's dad arguing outside, Zeke feels guilty about how Ben's well meaning actions have got him into trouble and so leaves the items outside in a metal crate for Ben and Andy to collect in the morning - along with a note explaining why he needed the items in the first place, before leaving in his ship but staying in orbit around Earth for the time being. Ben and Andy find the crate of items along with the note the next morning, reading that Zeke only needed the four items to try and win an award. Feeling bad that Zeke will fail his assignment and reading that he will beam up the crate at 10:00am, Ben and Andy decide to help him as they have just under half an hour to go.

Ben and Andy later put other items in the crate that won't get them into trouble this time, arriving in time:

As well as this, Ben leaves a note - explaining that the items they've put in are no longer important so they won't get into trouble, as well as wishing Zeke the best of luck on his assignment. Just before the crate is beamed up, a pregnant field mouse climbs into the crate due to smelling the cheese sandwich. A short while after the crate is beamed up, the boys receive another message on paper from Zeke - expressing his happiness. He also explains that he has left something on the back of the paper, that Ben will eventually work out thanks to his 'clever brain' - stating the last line is co-ordinates for his planet Celesstis 4 in a galaxy very far from Earth - with the hope that in the future, Ben and Andy will come to visit him. On the second sheet of paper, he also thanks them for the mouse - although this confuses both the boys as they didn't see the mouse climb into the crate.

3 Earth days later, Zeke is given the highest award by the ship's Grand Master for his findings - especially since none of the others who visited the planets in the Solar System found any of the items required. Zeke is giving a Celesstis-year's worth of extra food vouchers while all four of his suckers are pressed onto the starship's Wall of Excellence. After the celebrations had died down and the ship had gone into a rest period, Zeke slid out from his sleeping couch and pulled out a small Eco-crate with the field mouse inside - who had since given birth to five babies and which he had not told the Grand Master about - before giving her some more fresh water and Blaxxion grain-seed. The book ends by stating that "unbeknownst to Zeke, this would be the start of a great mouse plague on the Celesstis starships, but that's another story".

When author Kathy Hoopmann stated why she wrote the book, she wrote "Often people with Asperger’s describe themselves as feeling like they are on the wrong planet. No one really makes sense to them. I took that thought and had a real alien land in Ben’s back yard. I mean, who hasn't dreamed of something exciting like that happening to them! And a shape-shifter alien, no less. I also wanted to show how many people with Asperger’s get into all sorts of trouble by appearing to be disobedient when really they simply did not understand instructions. With a little bit of understanding and patience, those in authority can make life so much easier for Aspies."

Of Mice and Aliens: An Asperger Adventure - Children's Book

Retrieved from "https://aliens.fandom.com/wiki/Zeke_Martian?oldid=170513"
Community content is available under CC-BY-SA unless otherwise noted.