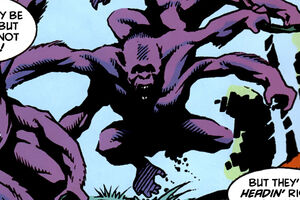 Alien
This is an unnamed species of four-armed ape-like arboreal aliens from the jungle planet Zeevan. They're one of many different species across the galaxy that can be impregnated by Xenomorphs, giving rise to a gorilla-like Xenomorph breed. Interestingly, however, only the planet's Xenomorph Queen has been shown to develop four arms.

Retrieved from "https://aliens.fandom.com/wiki/Zeevanian_Ape?oldid=198818"
Community content is available under CC-BY-SA unless otherwise noted.