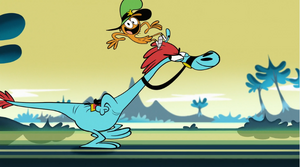 Wander Over Yonder
Zbornaks are a species of reptilian horse-like creatures.

They are a saurian species with three fingers and two toes, round bodies, long necks and prehensile tails, used for the purpose of attacking their enemies. They have feather-like fins and their heads and tails, similar to a Velociraptor. The sexual dimorphism is that females have a smaller, roughly horse-like dinosaur appearance, and the males resemble large rhinos.

Their digestion is also extremely slow, as they only need to urinate or defecate once every five months. They also possess great physical strength and stamina, making them built for fighting.

The Zbornaks have a society that is both modern and primitive (much like the Flintstones). They also live for combat, for which they evolved.

Retrieved from "https://aliens.fandom.com/wiki/Zbornak?oldid=202686"
Community content is available under CC-BY-SA unless otherwise noted.