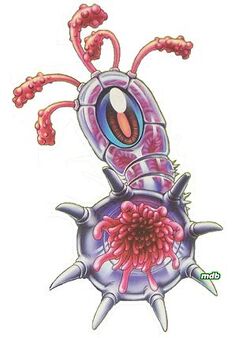 Metroid
The Zazabi, commonly nicknamed both Pogos and Cyclopses, are salial predators who leap onto their victims to kill and eat them; their mouths have even been adapted to exist on the bottom of their "foot". They appear to have a unique form of pouncing on a prey item: while they can scoot around just fine regularly, they will spring into the air during an attack, and slowly float down through the use of membranes that help make up the foot. When they manage to land successfully on the victim, the Zazabi closes itself around its foe and swallows it whole.

As one could easily expect from any organism, the inner organs of the Zazabi are weak to concussive blasts, and while their body is protected by a thick outer shell, the mouth provides an easy access point to their Achilles' heel. Oddly enough, each body segment seems to work on its own, and in fact, it is always the closest section of the body damaged by concussive blasts when injured in this way, perhaps indicating the body's use of strong muscular sphincters to pull food up into the top "head" portion, which seems to include the stomach and does the actual digesting.

If one is to assume that the X Parasites infested nearly the entire ecosystem of SR388 and that SR388 is indeed their homeworld, and that the planet was obliterated in the destruction of the BSL Research Station orbiting it, then they may possibly be classifiable as an 'extinct' species.