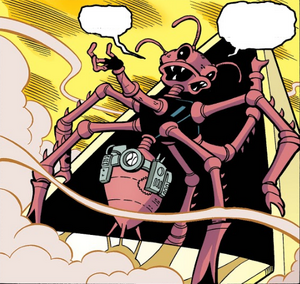 DC
The Zatons are an alien species that are currently engaged in a war against an alien race known as the Tagh.

The Zatons are an insectoid species with three antennas, three eyes, three legs and three arms. They appear to be bi-gendered

In order to learn how to disarm a Tagh gravity bomb, H'visst, a Zaton, used a captured Tagh device and placed in it on Earth in Oakville. The Zaton posed as a member of the Galactic Harmony Service before the Justice League, and explained the danger of the device and claimed that bomb was a result of the the Tagh and Xiotal galactic war. H'visst urged the heroes to evacuate their planet, though they believed they could disarm it. To prevent Green Lantern from safely removing it, H'visst claimed that the device would exploded if he approached it due to his ring. Later Wonder Woman using her Lasso of Truth on H'visst learned that there was a slim chance to disarm it, through Hawkgirl's knowledge as the Thanagarians had mastered gravity. However the Thanagarian studied the device found that there was no function that would permit the bomb to go off in the presence of a Green Lantern Ring. Batman suspicious of the Zaton's anatomy, being that it had a trinary biology save only for its arms, broke one off revealing it to be a fake, and thus escape from the influence of Wonder Woman's lasso. H'visst revealed that it lied and that his people were at war with the Tagh and tried to gain information on the gravity bomb. It tried to escape with the data that it gleamed but the Justice League apprehended him simultaneously removing the placed bomb offplanet.

Retrieved from "https://aliens.fandom.com/wiki/Zaton?oldid=180048"
Community content is available under CC-BY-SA unless otherwise noted.