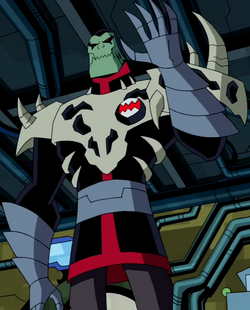 Ben 10
Zaroffians are a humanoid alien species from the planet Sangerosia.[1]

Zaroffians are humanoids with turquoise skin, small dark red eyes, gills under their cheeks, and large lower jaws that are fused with their lips, similar to Detrovites.

Seeing as how they are proficient at hacking, it is implied that Zaroffians possess enhanced intelligence.

Zaroffians are quite agile, being able to avoid being hit by weapons fire.

Zaroffians are durable for their size, enough to be unfazed by a Talpaedan's attacks.

Despite their enhanced strength, Zaroffians are physically weaker than Chimera Sui Generi, especially one with the same power level as Vilgax.[3]

Zaroffians can be affected by a Nemuina's sleeping dust. They also appear to be afraid of Nemuinas in general; this is likely due to being unable to defend themselves from their dream manipulation abilities.

Zaroffians are vulnerable to electricity, such as that generated by a Cerebrocrustacean.

In the past, Zaroffians worked as miners until they began dying due to the hostile and toxic environment of their planet.[1]

Only a handful of Zaroffians have managed to successfully escape Sangerosia. The list of those who have reads like a "Who's Who" of the galaxy's most ruthless warlords, despots, and mercenaries. Of those Zaroffians, only one by the name of Khyber became a huntsman. However, it is currently unknown whether Khyber was either an indentured worker or one of the masterminds behind the whole operation.[1]