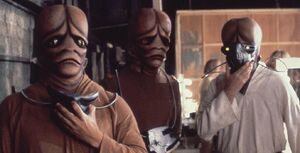 The Zaranites are a sapient, spacefaring humanoid race native to the Milky Way Galaxy. They wear masks that cover their faces and which seem to act as respirators, suggesting that this species may require different atmospheric conditions than Humans.

Some Zaranites have been known to serve Starfleet in the 2270s, suggesting that their homeworld might be a member of the United Federation of Planets.

Retrieved from "https://aliens.fandom.com/wiki/Zaranite?oldid=185074"
Community content is available under CC-BY-SA unless otherwise noted.