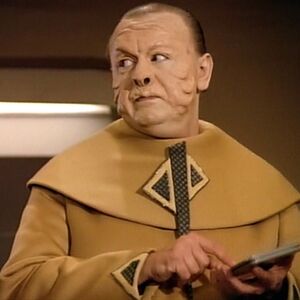 The Zakdorn are a spacefaring humanoid species known for their natural skills as tacticians and strategists; which are equally useful for both competitive games and combat exercises.

The mind of a Zakdorn is innately structured to deal with complex strategies. Because of this, they have a reputation for being rather arrogant and overconfident, and treating other races in a condescending manner.

At some point before 2365, the Zakdorn became members of the United Federation of Planets.

Retrieved from "https://aliens.fandom.com/wiki/Zakdorn?oldid=152275"
Community content is available under CC-BY-SA unless otherwise noted.