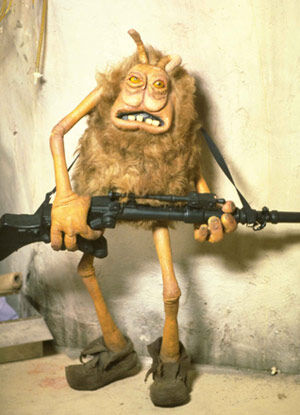 Star Wars
Yuzzums are a species of somewhat humanoid bipeds with rounded bodies and long spindly legs, covered in thick fur. They show a great deal of genetic diversity: some have wide, toothy mouths while others had fangs; some have clawed feet while others have cloven hooves and others still have paws; some have long pointed ears while others have no ears to speak of. Their eyes range from black to yellow in color. Their size may also vary, and some are quite tall while others might be shorter, although these dwarven Yuzzums are often social outcasts, indicating prejudice for height amongst their species.

Their species lives in small groups, traveling the plains of Endor's moon, Endor. They spend much of their day hunting rodentoids such as Ruggers and live in tall grasses. Some even have learned to domesticate the local Rakazzak Beasts as mounts to aid them in hunting. Although some groups survive without technology at all, others have fashioned primitive spears and forked lances for use in hunting and self-defense. Colonies of Yuzzum may be found on a number of other worlds, as well.

Yuzzums are sometimes exported as pets despite that they are a sapient species. Their musical language also makes them naturals to find work as singers offworld. One such Yuzzum was found in Jabba's Palace, and another was found to be a marksman for Jabba, having been the only Yuzzum not fed to his Rancor out of a shipment of them sent to Jabba in lieu of payment from one of his smugglers.

The local language of the Yuzzum is known as Yuzzum. The tongue is very musical in nature, and may have been the basis for Ewokese. In fact, Yuzzums sometimes encounter Ewoks - and other species on Endor's moon - and many Ewoks have learned to understand Yuzzum. Despite this and the fact that C-3PO used the language shortly before the Battle of Endor, the Yuzzums are not adverse to eating woklings.