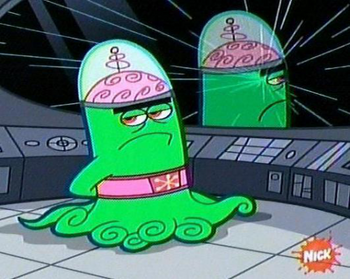 Yugopotamians inhabit the planet of Yugopotamia. They have contacted and visited the planet Earth on a number of occasions, usually to get in touch with 10-year old Timmy Turner. Perhaps the best-known Yugopotamian is Mark Cheng, prince and only heir of Yugopotamia. He is usually in his alien form but he currently resides on Earth in the Dimmsdale Dump disguised as a 10-year old boy who goes to Timmy's school.

Yugopotamians behave and like things opposite to Humans. They are attracted to unpleasant things like garbage and weapons of mass destruction and to them, manure is a very rare delicacy while chocolates, flowers, soy, Cosmo and Wanda's son, Poof and happiness are poisonous/deadly to them.

Although Yugopotamians are considered to be organisms inclined to war, their choice of weapons (candy bombs) are of little danger to Earth.

The Yugopotamian's first contact with Timmy Turner was when Timmy wished for an alien monster for him and his friends to play with. Instead of creating an alien, Cosmo and Wanda brought back Mark. Mark threatens the kids but very soon falls in love with Vicky because of her cruel demeanor and her order to make him a chocolate milkshake (very poisonous in Yugopotamia which led to his conclusion how amazing Vicky is). The kids tried to attack Mark but King Gripullon and Queen Jipjorrulac came to Earth as humans to drag Mark back home.

Depressed, Mark longed to be with Vicky again so it was perfect when Timmy wished she was a "million million" miles away from him so Mark took it as a cue to kidnap Vicky. Realizing what he had done, Timmy tries to save Vicky and accepts Mark's challenge to a "Ditch eh Fat" which is actually a Death Combat that took place in the Yugopotamian War Arena. When it was Timmy's turn to choose where the battle should be held, he picked Flappy Bob's Happy Camp Learn-a-torium. Mark got so overwhelmed with the sweetness that Timmy decided to spare his life in exchange for his babysitter when he turned sixteen but the timeline was wiped out because of Timmy and Vicky's reset watches.

On Halloween, Mark noticed the Earth was about to explode so wearing Candy Protection Suits, he flew to Earth to save Vicky. Cosmo prevented him from leaving because of Timmy's orders and when Mark saw who it was, he accused him of waging war (because of all the candy being gathered by the humans). Timmy followed suit and threatened to attack Yugopotamia despite their threats to release a P-Bomb (which stood for piñata bomb) which was exactly what Timmy wanted and Mark left, sad for thinking that Vicky was dead.

The Yugopotamian's war against Timmy stopped when Timmy saved them from the invasion of the "Special Surprise Inside", later known as the Gigglepies. Because these creatures were so adorable, the Yugopotamians surrendered easily and the Gigglepies took over. Mark was able to escape and asked for Timmy's help (because he was known as a great warrior for crossing a bed of flowers and eating chocolate) and offered to fight them alongside him but his attention was captured by Vicky. In the end, Cosmo led them to victory because he took a bite out of a Gigglepie thinking they're so cute and revealed that they were actually made of manure, a Yugopotamian delicacy. Timmy then wished that the aliens had knives, forks and empty stomachs and they were able to conquer the Gigglepies as a race.

Yugopotamia was destroyed by the Darkness in "Wishology". It is still unknown whether the planet was restored after the said events but it is not likely. It is also unknown if other Yugopotamians were able to survive other than the Royal family.

Yugopotamians are green, cephalopod-like creatures. They have over ten tentacles which they use for movement and two of which they use as hands. They have the same facial structure as humans but their brains are enclosed in a glass dome with an antenna on top. Despite the difference in planets, Yugopotamians are still able to survive given the composition of the Earth's atmosphere.

Their diet consists of disgusting things such as garbage and bonbons made of manure. In fact, they consider manure a very rare delicacy that other than the Gigglepie invasion, only the King had been witnessed eating such food. They also eat vegetables which to them acts as dessert as Mark Chang once rotted his teeth after eating broccoli. They are horribly allergic to chocolate and other sugar-based food and they believe that when ingested, they will die.

Yugopotamia is governed by a monarchy under the reign of King Gripullon and Queen Jipjorrulac. There is only one heir to the throne and that is a mid-to-late teens son named Mark Chang. Despite his parents' love for him, he is arranged to be married to the terrifying yet beautiful Princess Mandie. Because of this, Mark flees to Earth disguised as a human boy and fell in love with Timmy's babysitter, Vicky.

Yugopotamian society is highly hostile and militaristic, and they seemingly revel in the destruction of other planers out of a twisted sense of amusement.

Although Yugopotamians are foreign to the idea of Halloween, Christmas and other Earthen holidays, they do have a special holiday called F.L.A.R.G. Because Mark was so homesick, Timmy decided to help him celebrate F.L.A.R.G. which he later finds out stands for (Fart Lie Amnesia Ranksgiving and Goodbye to the planet they celebrate F.L.A.R.G. on) and he had to convince Mark to not destroy planet Earth because Earth was now Mark's home. Agreeing to Timmy's point, Mark them says "goodbye" to Fairy World.

Yugopotamians possess no special abilities other than having cool gadgets. Among their many gadgets, one is the "Fake-i-fier" where the one wearing it can transform into anything he pleases. However, there have been several known occurrences where the Fake-i-fier malfunctioned due to the presence of a Yugopotamian's weakness: kindness. This usually takes the forms of a kiss from a girl. During one specific event, Mark disguised himself as Justin Jake Ashton so that Vicky would fall in love with him but the Fake-i-fier broke right before the date and Vicky dumped him.

Retrieved from "https://aliens.fandom.com/wiki/Yugopotamian?oldid=187325"
Community content is available under CC-BY-SA unless otherwise noted.