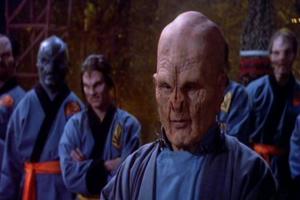 A long lived humanoid race from the planet Pa'ri, previously members of the League of Non-Aligned Worlds and are later members of the Interstellar Alliance. They are noted as being the race that originated the Mutai competition. By 2262 at least two Yolu had begun training as Anla'shok.

The Yolu are bipedal humanoids in appearance and feature high foreheads, short triangular noses with elongated nostrils, ears and a distinctive "gap" that runs from the centre of the forehead to the bridge of the nose. Like humans, Yolu are four limbed bipeds and have five digits on their hands though their feet have no toes.

Yolu skin is similar to that of humans in texture and it's colour varies from light yellow to black. The Yolu can perceive a much wider visible spectrum than humans and can see very well in the dark.

Retrieved from "https://aliens.fandom.com/wiki/Yolu?oldid=168871"
Community content is available under CC-BY-SA unless otherwise noted.