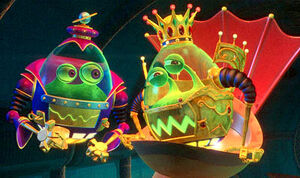 John A. Davis
The Yokians are a race of "yolk"-like aliens from planet Yolkus, who rely heavily on egg-shaped anti-gravity suits for moving from place to place. Their characteristics are similar to humans. They worshiped what they believed to be their goddess, a giant chicken monster named Poultra before Jimmy stopped them from feeding his loved ones to her.

Yokians have slimy green skin, which turns white to exposure of heat. They have a lower percentage of water inside their bodies, and they don't socialize with carbon life forms. The race is so advanced that they have found no need for their original bodies; instead, they rely on egg-like structures to hold their bodies in.

Jimmy expressed the belief that the Yokians are an advanced species, since they have evolved beyond the need for conventional bodies. Sheen said in reply that his boogers look like an "advanced species", to which Cindy and Libby were grossed out.

The Yokians live in monarchy under the reign of King Goobot V. They've tried for countless millennia to find sufficient sacrifices for their god Poultra, who eventually left Yolkus to rule over a different planet.

First contact of this species was made when boy genius, Jimmy Neutron, sent them a transmission, accidentally causing them to invade Earth (specifically Retroville, Texas), and abduct the resident children's parents.

Ooblar
Add a photo to this gallery

Retrieved from "https://aliens.fandom.com/wiki/Yokian?oldid=188549"
Community content is available under CC-BY-SA unless otherwise noted.