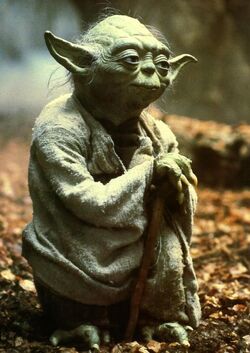 Star Wars
This is an unnamed sapient alien species to which Jedi Master Yoda belonged.

These are short, green-skinned humanoids with long, pointy ears and three clawed fingers on each hand. The number of toes they have on their feet is not clear, as they have been depicted with three, four or five toes on different sources.

While most members of this species rarely grow to be more than two feet in height, they make up for their lack of stature with their incredible longevity: the average lifespan seems to be hundreds of standard years, with Yoda himself dying at the age of 900. However, the fact remains that Jedi always seem to have a longer lifespan, so determining the exact normal lifespan of the species based on Master Yoda alone is not possible.

Their sharp teeth indicate possibly carnivorous origins, but they are omnivorous in diet. In addition to having green skin, members of Yoda's species also have green blood, a characteristic shared with Vulcans, Melmacians, Yautja and other well-known extraterrestrial species.

While Yoda was comfortable living in both city and swamp, it is unknown what the natural habitat of his species was. Their green, leathery skin suggests that they originated in a swamplike environment, a theory possibly reinforced by Yoda's willingness to choose a hostile planet such as Dagobah as his place of exile.

There are few other known members of Yoda's species. 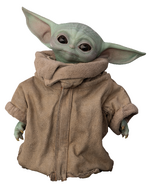