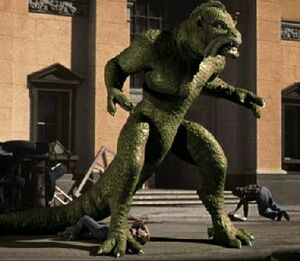 The Ymir is a semi-sapient, reptilian-like humanoid native to the planet Venus. Virtually nothing is known about the Ymir in its natural habitat, except that it feeds on sulfur and is somehow able to survive in the harsh environment of its homeworld, as well as on Earth.

The Ymir is a strange life form, possessing scaly, reptilian skin, but being shaped more like a primate (albeit with a long reptilian tail). It feeds on sulfur, and grows rapidly in the oxygen-rich atmosphere of Earth. It is unclear if it would ever stop growing at all. It appears to be warmblooded, as it remains active during extended periods of time.

The Ymir is driven by instincts and a desire to survive, and like an animal, it is neither good nor evil. It hasn't got any grand schemes of conquering worlds, or, at first, at least, wiping out humanity. Instead, it is driven by a craving for sulfur, and will stop at nothing to find a good meal. Its appetite is insatiable.

At birth, the Ymir that found its way to Earth was perfectly safe around Humans, as it had grown up around them, but would already attack unfamiliar animals. When it preyed upon a dog, the owner of said dog retaliated and stabbed the Ymir with a pitchfork. Since then, the Ymir became misanthropic, and remained violent and fearful of humans. It destroyed buildings and spread havoc, including mauling a zoo elephant to death.

A Ymir egg was found by Human scientists during an expedition to explore Venus and its mineral resources in the year 2038. The egg was brought to Earth to be studied, but unfortunately, the spaceship crashed just off the coast of the Sicilian region of Italy. The Ymir egg fell out of the hole in the ship and floated onto the coast of Sicily. After this, a young boy found the egg and eventually gave it to a scientist. When the Ymir emerged from its egg, it began to grow more and more due to the oxygen-rich atmosphere of Earth. The huge beast started to rampage, spreading chaos and destruction as it searched for sulfur to eat. The alien was eventually killed by Human authorities.

Retrieved from "https://aliens.fandom.com/wiki/Ymir?oldid=183808"
Community content is available under CC-BY-SA unless otherwise noted.