"Whether it was out of love for all life or simply a clinical desire to mend something broken, the Yma took our seared world in hand and began to teach us how to repair it."
―Wayne D. Barlowe 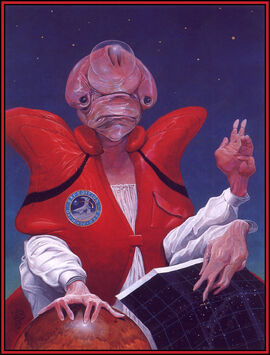 Wayne D. Barlowe
The Yma are a sapient extraterrestrial civilization characterized by a strong sense of conservationism and protection towards alien ecologies. They made first contact with Humans in the early 23rd century, finding an Earth devastated by pollution and ecological decay. As decided by the interspecies accord of 2231, the Yma have since taken responsibility to manage Earth's biosphere recovery projects. Little else has been revealed about the Yma other than that their technology includes faster-than-light travel and their language is made out of whistles and harmonics, with rapid clicking sounds as their form of laughter.

Following the discovery of the Darwin Binary System, the Yma have been the main founders and developers of an Yma-Human joint mission to explore the environments of Darwin IV, closely but passively studying the native biosphere and taking extreme care to prevent unnecessary interfering with the native life. The Darwin IV expedition, which took place from 2358 through 2361, resulted in the discovery of dozens of native species including a sapient although Paleolithic race known as the Eosapiens. Since that, the entire Darwinian system has been deemed a preserved area by the Yma and is under constant monitoring from their robotic probes.

The sole glimpse about the Yma's appearence is a single picture of their upper half by Barlowe. They are neither illustrated nor described in Expedition, and are absent in Alien Planet.

The physique of an Yma is roughly humanoid, with a distinct head and four arms. The slightly pointy head has two nostrils at the top, covered by a transparent bladder. Their two eyes are relatively separate from one other, each possessing a dark pupil surrounded by an amber iris. The only remaining facial features are two horizontal ridges, with one of them being presumably the mouth.

The hands at the end of their four arms look similar to those of humans', except that they are symmetrical. Thus, they exhibit hexadactyly and possess two thumbs and four digits. Their fingers are much more thinner and lack fingernails or claws. Their two "middle fingers" have their proximal phalanges fused with their two "index fingers."

Retrieved from "https://aliens.fandom.com/wiki/Yma?oldid=189996"
Community content is available under CC-BY-SA unless otherwise noted.