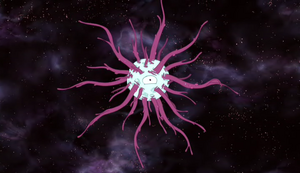 Size of a dwarf planet

David Cross
Yivo is a huge, planet-sized alien from another universe in which Yivo dwells alone (in contrast to ours, where we are many).

Because there are no others like Yivo, Yivo has no determinable gender, and thus instead of "he" and "she", the word "shklee" shall be used, as well "shklim" or "shkler" to replace "him" or "her". Yivo is super-sapient, and can communicate coherently with 20 quadrillion beings, all simultaneously and can also do 20 quadrillion simultaneous tasks.

Due to Yivo's sheer size, upon shkler is a world where people of Universe Gamma can dwell. However, it appears to be much similar to Heaven of several religions in human culture. According to Yivo, that is because shklee sent an image of it to Universe Gamma's artists long ago—the clouds are vapors that shklee exhumes, and the angels are just mindless Jakabirds which keep shklis body clean and free of parasitic larvae.

Yivo has the appearance of a large one-eyed planet covered in tentacles, which are actually "gentacles" (a portmanteau of "genital" and "tentacle"), shkler body is comprised of electromatter, which scientist Professor Hubert Farnsworth describes as "matter's badass grandma", that cannot be penetrated by anything of our universe.

Yivo has existed for longer than our universe has existed, so shklee may be older than the Nibblonians. Accordingly Yivo had a stamp collection until shklee realized shklee was alone.

It was not until the Anomaly appeared that Yivo got shkler chance to end shkler loneliness. Through the Anomaly came Philip J. Fry, who was lonely and depressed due to his recent breakup with his girlfriend Colleen and possibly his inability to ever get in a relationship with Turanga Leela. In Yivo's universe, they met and created a relationship.

Yivo then decided to get emotionality attached with everyone in Universe Gamma — this universe — with shkler tentacles that could reach everywhere. However, at first the people of Universe Gamma weren't pleased with the thought of having the tentacles in their world until they were attached, at which the apparent brainwashing forced them to like it—this quickly turned out not to be the case, as they had actually fallen in love.

However, Turanga Leela managed to avoid getting attached by pretending to already have with a pink garden hose. She then revealed to everyone that Yivo's tentacles weren't at all tentacles, but "gentacles," meaning that Yivo had been mating with everyone in Universe Gamma. Yivo explained that shkler plan was simply to mate with Universe Gamma, but quickly agrees to call it off and pulls the tentacles/gentacles out of everyone.

The people of Universe Gamma agree to go on a date with Yivo. But when Yivo doesn't seem to be making any kind of commitment, they decide to dump shklim. However, when they prepare to give shklim the news, Yivo proposes to Universe Gamma, and they accept. Everyone in Universe Gamma enters Yivo's universe and lives on top of shklim, which looks very similar to the concept of Heaven. Everyone seems happy there until Bender and his Army of the Damned drags Yivo through the Anomaly so they can destroy shkler.

When Yivo finds out how Bender could attack shklim, shklee finds out Fry contacted Bender, which shklee had specifically asked none of them to do (i.e. not contacting other universes). Shklee decides to break off the marriage. But to shkler consolation, shklee did find someone who understood shklim, namely Colleen. And so they leave Universe Gamma together, and the Anomaly closes.

Retrieved from "https://aliens.fandom.com/wiki/Yivo?oldid=187070"
Community content is available under CC-BY-SA unless otherwise noted.