Sesame Street
Yip Yips - often referred to simply as "The Martians" - are a group of cowardly interplanetary visitors presumed to be from the planet Mars. They are terrified of things like clocks, telephones, and computers, despite their obvious significantly advanced technology (displayed through their possession of teleporters). Perhaps luckily for them due to their inherent cowardice, they rarely seem to come face-to-face with other sapients.

The Yip Yips are short beings with large eyes and a vast mouth, which they can use to hide their faces in, likely a talent evolved as some form of defensive posture that works on their home planet. Their lower section is composed entirely of a large complement of cephalopodic tentacles, which seem mainly for manipulatory purposes, as they are capable of hovering through unknown means. The tops of their heads are adorned with a pair of wavy antennae.

A Yip Yip is nothing if not perpetually curious, and when they come across Earthly objects, will often consult a manual that they refer to as "Earth book", a large tome of knowledge that seems to contain information about a good amount of objects from the third planet of the Sol system. While obviously intelligent as they are a spacefaring species (although this may in fact be due to some unknown physical trait they possess as opposed to technology), they seem to be unable to match information or pictures of an object with an actual object, as they have been documented confusing a telephone with a human, a cow, a cat, and a chicken before discovering what it is when it rang. Even upon this discovery, they responded with rings back, clearly pleased to have established communication with it. With this in mind, they are easily marveled at the technology of other species.

Native Yip Yip language is either extremely easy or extremely complex, although whether it is one or the other has never been discovered. The language is spoken in a monotone voice. The following is the perfect example of a common Yip Yip sentence: "Yip-yip-yip-yip... Uh-huh. Uh-huh." 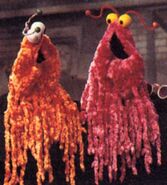 The puppets of Yip yips
Community content is available under CC-BY-SA unless otherwise noted.
Advertisement