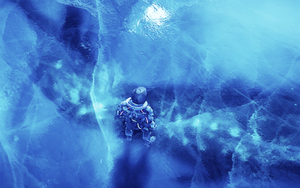 Yevara are a aquatic species found on the planet Voeld in the Andromeda Galaxy.

The yevara are glowing aquatic beasts dwelling beneath the frozen seas. They are able to communicate through intricate songs. The angaran scientists studying them are stumped as to how they survive beneath the ice.

They are creatures that are revered by the angara as they are links to their lost history that survived the Scourge.

Its revealed that the Exiles, have been poaching the yevara under orders froms a rogue angaran scientist who discovered that the yevara's unique biology allows them an immunity to kett weapons.

Retrieved from "https://aliens.fandom.com/wiki/Yevara?oldid=164840"
Community content is available under CC-BY-SA unless otherwise noted.