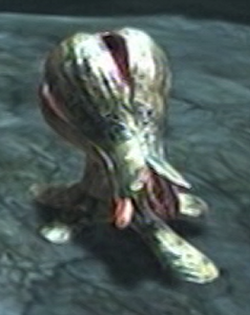 Yerdua Poison-Spitters were a unique species indigenous to the jungle planet of Felucia which was notable for blurring the distinction between what one could normally identify as an animal-, plant-, or fungus-equivalent.

Its main body, known as its trunk, was green in coloration while the meaty "flowers" that made up the rest of the species was usually red and white. These "flowers" consisted of four thick petal-like lobes which surrounded a poison-spitting organ housed at its center. Although they were sessile due to rooting themselves in place, they were able to still maneuver their trunk and petals to confront targets at speeds usually associated with animal-equivalents. As it could identify threats within its environment, take aim and release its poison globules (which it could fire within seconds of acquiring a worthy target), it was considered to be semi-sapient. It was also known to defend itself should a predator or foe get too close; at this juncture it would contract its petals together in order to protect the sensitive central organs that kept it alive.

Yerdua Poison-Spitters were known to have been trained and at least partially domesticated by the Jungle Felucian natives, utilizing the beasts to guard their villages and trade routes from native predators and would-be foes alike. As a reward for doing their bidding and to keep the creatures compliant, the Felucians would feed the creatures meat as well as keep them free of parasites. One can only assume that they likely used the plant's poison for various cultural purposes as well, such as on their hunting weapons.