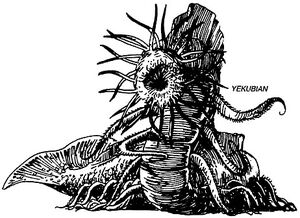 "The Challenge from Beyond"

H. P. Lovecraft and Robert E. Howard
The Yekubians are an advanced extra-galactic race of vermiform sapients who have conquered the entirety of their home galaxy.

Members of this species are pale-grey centipede-like beings, "as large around as a man and twice as long". Their heads are disc-shaped, and bear no sign of eyes. Instead, they possess myriads of cilia and a purple orifice that might be their mouth. They also have flexible red spikes around their necks, which move around and click to create their rhythmic language. The other end of their bodies is adorned with a fan-shaped membranous tail.

Although the Yekubians cannot travel beyond the limits of their own galaxy, they have created devices that allow them to switch minds with other species, similar to the Great Race of Yith; and sent some of these devices scattered throughout other galaxies, including the Milky Way, in hopes of exploring these worlds.

Their culture is entirely alien to human standards, and they apparently cannot even conceive of the idea of one of their own kind intentionally killing another.

Yekubians worship the artifact they know as "god of Yekub": a translucent sphere shrouded in mist. The reason why this object was worshiped originally has been forgotten over a million years ago, but the religion is still operating.

Retrieved from "https://aliens.fandom.com/wiki/Yekubian?oldid=182296"
Community content is available under CC-BY-SA unless otherwise noted.