The Yautja are the primary alien antagonist species of the Predator film series, they portrayed as a race of hunters that continuously seek human and other exotic prey whether sapient or non-sapient.

In the various non-film media the Predator have been portrayed in a number of different ways, they are typically called the Yautja (ya-OOT-ja) in expanded material and the term has generally been accepted by fans and writers of the material.

However in two of the DH Press predator books, starting with Predator: Forever Midnight they are portrayed as the Hish-qu-Ten (Abbreviated as Hish), with seemingly no attempt to even loosely connect them with previous versions of the species.

The Yautja species consists of mostly male Predators - the Predator females are a rare occurrence and there are only a few known ones.

Predators are physically distinguished from humans by their greater height, arthropod-like mandibles and long, hair-like appendages on their heads that are set into their skulls. Their bodies are resilient to damage, capable of recovering from multiple gunshot wounds and radiation doses which would be fatal to humans. They are much stronger than humans, having been portrayed as being easily capable of outmatching a conditioned adult human male and shattering solid concrete with their bare hands. They are also skilled climbers, and will readily move through trees or across rooftops in pursuit of prey. Though capable of surviving exposure in Antarctic temperatures for an extended period of time, it is implied that Predators have a preference for hot equatorial climates.

Consistently the blood of the Yautja has been portrayed as a luminous phosphorous green.

The dreadlocks are an iconic physical feature of the Yautja seen in every published material featuring them. In the films the Yautja wear what appears to be jewelry on them, and the Predalien eventually grew them (implying they are genetic).

As the films are told from the perspective of human characters nothing is revealed about the creature's evolutionary history. 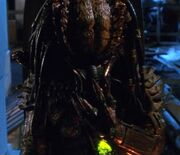 The Yautja in every film they have appeared in have worn masks to apparently aid in breathing, although in each film at least one member of the species either removes the mask or loses it, in no cases were any members of the species abilities hindered in a human atmosphere. In Predator 2 when the city hunter lost his mask he used a hand-held breath mask.

The subject of Yautja reproduction is not touched upon in the slightest within the films, there are many members of the species seen but none blatantly female by human standards.

Not much is known about the Yautja skeleton, it has not been seen in full in any of the films. In Predators a Yautja skull was seen in the Super Predator trophy-site.

It has been demonstrated clearly in every film that the Yautja naturally see on the infra-red bandwidth of light, most likely exclusively. This has been shown to be both a strength and a weakness, Dutch was able to avoid being seen by covering himself with mud in the original film, and Royce was able to blend in with another heat source.

Their vision can be altered or augmented with their masks, several different vision modes have been seen but their function has not been clearly defined. It should be noted that when the Jungle Hunter removed his mask his vision changed greatly, this has not been seen in any other film. there are numerous theories in the fandom as to why this is, the predominant one being that the relative temperatures of the jungle were very high and his mask aided in filtering them, this is supported by events in Predators.

Various miscellaneous biological aspects have been given throughout the various published predator media that do not fit strict categorization.

There is clear evidence that there have been peaceful relations between the Yautja and Humanity with ancient civilizations that were discovered during AVP. We see flash backs of humans worshiping the Predators as Gods and deities, as well as performing human sacrifice so the predators could partake in their hunts of the Xenomorphs. It could also be said that the Yautja are the creators of some known human civilizations such as the Egyptians and the Aztecs from teaching humanity of architecture and other technologies.

Furthermore it has been seen that Humans have been noted by the Yautja as being warriors in their own right. This shows the behavior of the Yautjia when dealing with warriors not of their own kind and when recognized, a notion of respect is given.

There is virtually no indication of government in any of the films, the Yautja are portrayed as operating in groups with clear leaders but no indication of how they the society functions is given. In Aliens vs. Predator: Requiem when a predator ship crashed it was shown there was a quick response to the situation, indicating a governing force that monitors the hunts.

Virtually nothing of the predators eating habits is revealed in the films, the City Hunter from the second predator film did covertly raid a slaughterhouse for frozen beef.

In Predator 2, Aliens vs. Predator, and Predators, the Yautja are clearly shown to be organized into groups (in expanded media these groups are almost universally referred to as clans and thus will be here). These groups seem to be somewhat familial with clear hierarchical structure and leaders, each of these clans in the films seems to have distinct technology and customs, although they are largely the same.

The yautja has had an extensive history of influence on Earth which includes teaching early human architecture.

Retrieved from "https://aliens.fandom.com/wiki/Yautja?oldid=154829"
Community content is available under CC-BY-SA unless otherwise noted.