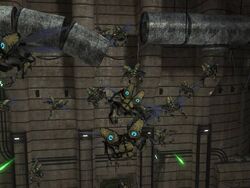 Halo
The Yanme'e, also known as Covenant Drones are a sapient race of insectoids from Palamok who have been enslaved by the Covenant. While initially used as secondary engineers for when no Huragok was around, they later were brought into military service when it was decided that their flight capabilities would prove useful against the UNSC forces. They speak in a cacophony of high-pitched chirpy, clicking noises produced by rubbing their waxy, leaf-like wings together; however, it is uncertain if this is a hive communication or individual conversation.

Yanme'e possess a pale green exoskeletal structure that supports their mass. Thick in texture, this style of skeleton prevents them from being transformed into Flood, which require a skeletal structure to inhabit. Not only this, but they lack the calcium also required by the Flood to create an infested being. However, this does not prevent them from being used by the Flood for biomass. For unknown reasons, the Covenant (or perhaps the Yanme'e themselves) have integrated pieces of machinery into their carapace, likely to aid in structural hold. Even with this, however, their chitinous skeleton cannot hold up tremendously well against weapon fire. This is probably the biggest reason that they prefer to stay at a distance and use long range tactics, despite the fact that they are skilled melee combatants as well, utilizing their climbing claws in close-quarters. They have also been noted to land on vehicles and use these same claws for vicious and surprisingly powerful attacks against the occupants. They will also use power of numbers to protect themselves, often flying in swarms of 50 or so.'

Yanme'e, strangley, evolved on a very high gravity planet, with twice the gravitational gauss and newtons than Earth. They are insectoid in appearance, but not really a true insect, as they seem to have two abdomens and do not possess the ability to fly, only evlolving its "wings" to cool itself on the hot temperatures of Palamok. However, with the aid of a graviton amplifier (it was described in the Halo universe that gravity was made up of Gravitons, which were smaller than gluons in size). They had extremely weird (rather like the electron) physics, and seemed to cancel each other out when two managed to collide from alternate and opposite routes) which allowed them to defy the laws of gravity and "break the bonds". The Yanme'e, with the help of their wings and the graviton amplifier could easily achieve flight.

The Yanme'e queens are described as being enormous had having to be supported by multiple wingless Drone workers. A Drone's exoskeleton is covered with numerous bumps, grooves, indentations, and markings, which seem to be used for camouflage. They also have six limbs (with the last two appearing vestigial), compound eyes with eyelids, and two fuzzy antennae that jut forth from their small heads. They have peculiar light green/light gray blood.

It was reported from the African mega city New Mombasa by police forces and an ODST trooper that the Yanme'e were taking and eating civilians and police this shows that their diet consists of meat. It is possible that they might eat vegetation as well (possibly from their home world) or some other type of organic food.

Like the Unggoy, the Yanme'e were a conquered race that was forced into service by the Covenant. While they strictly follow Covenant religion and obey any command without question, they do not partake in social normalcies or even interact with the other races due to communication difficulties. Their only interaction is typically trade and to serve in a military capacity as they are commanded to do.

Initially seen as little more use to the Covenant than as secondary engineers for their capabilities of flight and survivability in vacuums, it was eventually agreed upon to allow them to work in a military role. At this point, they seemed to be placed in a rank that was higher than both the Unggoy and the Kig-Yar, but below the ranks of the Sangheili.

Once the Covenant Civil War began, the Drones chose to remain loyal to the Prophets, potentially due to the perceived strength of the Jiralhanae and their natural weakness causing them to want the protection provided by them. However, this could have also occurred due to the Drones viewing the Prophets as their queens, a remnant of their former hive lifestyle.