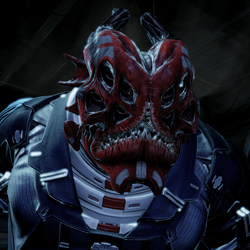 Mass Effect
The yahg are a sapient race of towering humanoids native to the world of Parnack, known for their violent and aggressive nature. Mighty predators, the yahg possess great perceptiveness and mental adaptability.

The yahg are a race of massive apex predators from the world of Parnack whose rise to sentience in no way blunted their violent nature. A group of yahg is unable to cooperate until a single leader has been determined through either social maneuvering or brute force, but no grudges are held once a yahg establishes dominance. Former rivals serve their new superior's purpose with unflinching loyalty and relentless determination, a legacy of their origin as a pack species.

Their eight eyes are another sign of their hunter ancestry--all four pairs are geared toward tracking down and predicting the movements of prey. Sophisticated and keenly developed sensitivity to movement and light have made yahg masters at reading body language, regardless of species. Much to their short-lived chagrin, the Council's first contact teams discovered it was nearly impossible to lie to the yahg.

The yahg had technology equivalent to 20th century Earth standards when they were discovered by the Council in 2125. The Council's ambassadors approached the yahg as friends and allies instead of subordinates, a baffling sign of contempt from newcomers on Parnack. The yahg attacked when it became apparent that the alien diplomats stubbornly considered themselves sovereign people instead of new underlings. Parnack remains off-limits by order of the Council, which fears that the yahg's size, aggression, and obsession with control make them poorly suited for integration into the galactic community.

The yahg evolved to fill the niche of apex predator on Parnack. Yahg have four pairs of eyes, each pair designed to track and predict the movements of prey. A keen sensitivity to movement and light allows the yahg to easily read the body language of any species. The yahg also possess a large, muscular body which provides considerable physical strength and agility, as well as considerable endurance to pain.

When Parnack was discovered by Citadel Council surveyors in 2125 CE, the yahg were a pre-spaceflight civilization with technology equivalent to that of 20th century Earth. A Council delegation of ambassadors made first contact with the yahg and attempted to establish diplomatic relations. Unfortunately, the yahg perceived the ambassadors' attitudes and behavior as equal individuals instead of subordinates as a sign of contempt, and attacked and massacred the entire delegation.

Immediately following that incident, the Citadel Council severed all contact with the yahg and declared Parnack off-limits. The Council maintains that the yahg's aggression and obsession with control make them poorly suited to integrate with the galactic community. A single Yahg was taken by the Shadow Broker as a pet or trophy, but it managed to usurp his role without anyone discovering the change. It was then killed by Commander Shepard and Liara T'Soni, the latter who took on the role of Shadow Broker.

Essentially, nothing is simply given in Yahg culture. Respect must be earned, and earned by testing the capabilities of something. All leaders must be able to best their rivals indisputably- depending on the situation, by being a better fighter, more skilled at the task at hand, or better at social/political maneuvering. Anyone who comes out second-best does not hold grudges, and will serve loyally. Yahg culture is a constant struggle for status, with innumerable variables and competitors that must be tracked and assessed, constantly.

Being raised in this intrigue-and-power-play laden society made one Yahg extremely valuable as a Shadow Broker agent--and, presumably, led it to challenge the then-current Shadow Broker. The old Broker was defeated, and the new Shadow Broker settled into a life of balancing physical, economic, and political forces and playing sides against each other to assure his own survival and supremacy- something he'd done all his life.

Retrieved from "https://aliens.fandom.com/wiki/Yahg?oldid=179467"
Community content is available under CC-BY-SA unless otherwise noted.