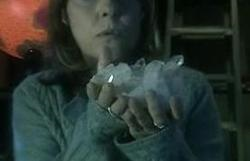 Doctor Who
Xyloks are a sapient species of crystalline lifeforms which apparently can be found inside asteroids. They can live for millions of years and are able to directly interface with computers and other forms of technology.

About 60 million years ago, an asteroid crashed on Earth, containing several members of this species, which became trapped in the planet's crust with no hope of escaping. They remained in this state for several ages until the Krakatoa eruption of 1883, in which one of the Xyloks was released. Pretending to be a benevolent entity, the Xylok ended up in Sarah Jane Smith's attic and started communicating with her technology and formed its plan to design Mr. Smith, (which is completely different from the Crystal, due to Mr. Smith being a Xylok computer in the wall). Mr. Smith's actual plan was to manipulate events to cause the destruction of the Earth and thus free his colleagues who were still trapped underground.

Retrieved from "https://aliens.fandom.com/wiki/Xylok?oldid=198076"
Community content is available under CC-BY-SA unless otherwise noted.