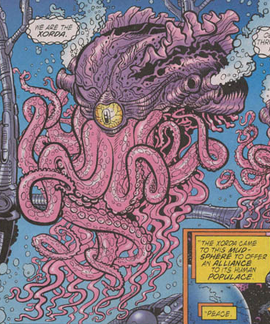 The Xorda (pronounced "Zorda") are a warlike alien species that are somehow capable of intergalactic travel despite residing in an aquatic environment. In the 21st century of Earth, their emissary came to offer an alliance with the Humans, but was captured and dissected by Dr. Ivan Kintobor and his science team. Enraged, the Xorda attacked Earth using Gene Bomb weaponry. They then left Earth, thinking they had killed all Human life, when in reality the surviving creatures attained Human DNA and evolved into what are now known as Mobians, and Earth was renamed Mobius by the new inhabitants.

After their envoy was captured, imprisoned, and then dissected, they attacked Earth with Gene Bombs; and, believing that all life was eradicated, they left Earth. They were, however, unaware that the surviving animals mutated with Human DNA and became what we now call Mobians, and the remaining Humans were slightly mutated, and de-evolved into what are now known as Overlanders: the energy from the Gene Bomb also created the Chaos Emeralds.

Not much is known about the Xorda, such as what their culture was like, what their religion was (assuming they even had one), etc. This leaves much speculation about them and a lot to be debatable.

Retrieved from "https://aliens.fandom.com/wiki/Xorda?oldid=182743"
Community content is available under CC-BY-SA unless otherwise noted.