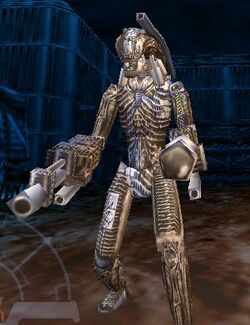 Alien vs Predator
Xenoborgs were created by Livermore Evanston, a mad-man who planned to control the galaxy. He set up a cybernetics organisation on the planet Blior, or "hunters planet". He created them by combining genetic modification with cybernetic enhancement on Xenomorphs. He planned to create an army of Xenoborgs and then use them to take over the universe, crushing any resistance.

When Evanston's plot was discovered, an alliance of Human mercenaries and Yautja invaded the bio-factory where the Xenoborgs were created. The newly made Xenoborgs were called into action. However, when being controlled by Evanston, they were ineffectual. They were slow and uncoordinated. When Evanston lost control, the Xenomorphs' natural instincts took over. They fled, killing anything that got in their way.

The main cybernetic changes to the Xenomorphs were that they could be radio controlled and the addition of armour and weapons. The controlling equipment was housed in their heads, and allowed someone to control them from a distance via a control panel, although the range of this control is unknown. The weapons and armour differed from creature to creature.

"Bigger than normal bugs, they towered over the Predators, armored and outfitted with cyborg exoskeletons and extensions, with several arms, all holding weapons of various kinds, from blasters to spears and knives. Nor where they all identical. Some leaned more toward Qeenhood, drool dripping from their razor-sharp fangs, claws curiously tangled with weapons in awkward grips."
―Description of the cybernetically-enhanced Xenomorphs.

The quote above also gives a good idea of the weaponry they were armed with. The genetic changes were mainly focused on the Xenoborg's ability to hold guns and other weapons, although they were also fitted with eyes and some sources hint at some enhancement of their intelligence. When control over the Xenoborgs failed, they reverted to their basic instincts. When this happened, the Xenoborgs became much more deadly. After their release they moved "with a speed that Machico had never before witnessed". Quickly slaughtering anything that got in their way, they tried to escape and seek shelter, however, the Yautja killed them all.

Due to the radio control the Xenoborgs are very slow and sluggish and can be taken down with relative ease by an agile opponent as their clumsy blows can be easily avoided.

The weapons give uncontrolled Xenoborgs a marked advantage when met initially, but after this first encounter, enemies come to expect them and they prove less effective. Nevertheless they are extremely proficient in close combat, tearing apart Humans with ease and giving Yautja a reasonable fight.

Retrieved from "https://aliens.fandom.com/wiki/Xenoborg?oldid=163541"
Community content is available under CC-BY-SA unless otherwise noted.