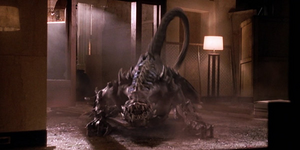 Whilst working for Bureu 713, Hugdens began abducting orphans from an orphanage home run by Sister Clara, convinving her that it is for the hope of mankind.

They come in two forms: a small "infant form" and the larger adult which is reptilian in appearance.

The infant-like form can somehow be inserted into a human body, giving host supernatural strength and endurance. So far at least two people were implanted with the infant variety, James Pinkerton and Carnby. However, Edward's symbiote has already been killed due to the fact that he suffered an electrical shock as a child.

The more mature adult form is a larger creature that is reptilian in appearance.

Prof. Lionel Hudgens takes the hybridization even further by injecting himself with the blood of an adult creature that was trapped in a gold coffin. The effect turns him into a semi-alien as well as the ability to control the monsters.

The xenos were invulnerable to most metals with the exception of the elements 76-79, which includes Osmium, iridium, platinum, and gold.

Retrieved from "https://aliens.fandom.com/wiki/Xeno_(Alone_in_the_Dark)?oldid=161751"
Community content is available under CC-BY-SA unless otherwise noted.