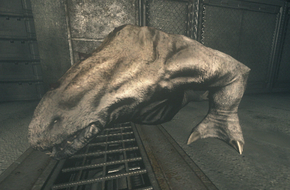 Xenos or Critters are a large species native to the planet that the Butcher Bay penal colony was built on.

Xenos are large bi-pedal creatures with grey skin, two toes on each foot, and a long tail. They are carnivorous, being capable of consuming human beings, and they have bright green blood. Upon their backs is a cavity upon which a smaller Xeno rides.

It is assumed the smaller Xeno is an infant, but it could be a smaller symbiotic species, or even an example of gender dimorphism. The smaller xeno aides in hunting and is capable of decapitating a human with its tail.

Xenos are aggressive, actively hunting prey in the subterranean tunnels beneath Butcher Bay, they mostly seem subterranean but few parts of the planet have been seen outside of Butcher Bay so they may dwell elsewhere. It is unknown what they naturally prey on as there are no known species on the planet larger than insects.