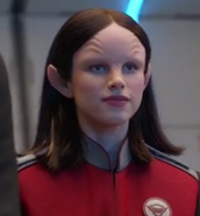 The Xelayans are an alien species of the Planetary Union in The Orville Series.

The Xelayans are humanoids, though they possess ridges above their eyebrows. In addition due to the heavy gravity of Xelayas, in Earth gravity their strength is elevated. Xelayans differ from humans in that they don't possess any livers.

Xelayans don't usually join the military thus when one of them does, the Planetary Union bumps them up in the Fleet. Though their culture seems more related and incline to academics.

Retrieved from "https://aliens.fandom.com/wiki/Xelayan?oldid=136902"
Community content is available under CC-BY-SA unless otherwise noted.