The Xchagger are a race of quasi-sapient microorganisms. They are openly friendly and will try to help other races in any way they can, only asking in exchange that they be treated as equal sapient beings. Having just reached the stars, they are somewhat naive, which resulted in the Hegemonic Crux succeeding in taking advantage of them. They see other sapient life as being "overly complexified", showing their belief that all that is needed for sapience is a lone cell.

While not possessing intelligence singly, they obtain a hive mind when grouped together. As such, their sapience is not detectable within a single Xchagger yet is strong enough to be detected within a colony. Not even the Xchagger themselves understand how this hive intelligence works, and only realize they are intelligent and sapient despite what others, such as the Daktaklakpak, state.

Living on six-legged organisms known as either Gund-cows or Ortogs, Xchagger rapidly multiply, creating a new generation (or as they call it, a dynasty) by replicating every few minutes. They also can and will secrete materials that are used in the creation of their starships, the Exclave Colonies.

Exclave colony ships have a rapid-firing rate that can prove devastating to their enemies. They have a major disadvantage in possessing a slow turning radius, but this can be helped with effective use of their paralysis missiles. Unfortunately for an Exclave ship, if an enemy captain is intelligent, they can stay clear of the Exclave and launch stand-off attacks, their battle with the Xchagger vessel will prove to be a relatively safe one in the eyes of the opponent. 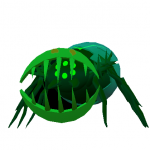