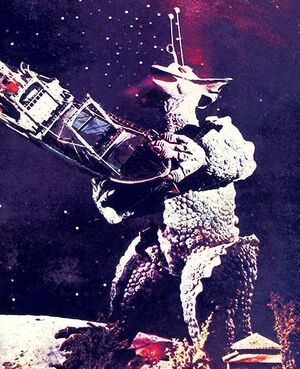 X Spores are a unique species created from the explosion of stars. They are made of a special form of condensed energy and as such are likely born within the star itself, in a similar manner to To'kustars (although To'kustars are born inside of cosmic storms, not stars). These X Spores are normally small, and appear to be collected by an unknown extraterrestrial race, apparently for use as a weapon of mass destruction. Because all of mankind's experiences with X Spores have involved these aliens who appear to collect them, it is unknown if they are naturally covered in Guilalium or if this is instead a safety precaution taken by the sapient race themselves to make sure their weapon doesn't end up turning on they themselves. These spores are perhaps not spores at all, but seem most similar to the dehydrated tuns of water bears, although the X Spores seem far more advanced at condensing their energy into a small space; whereas a water bear will dehydrate to approximately a tenth of its normal state, an X Spore seems capable of shrinking more to perhaps a millionth of its active state.

X Spores consume energy - specifically of the nuclear persuasion - to survive, and upon reaching an atmosphere (presumably it will adapt to any atmosphere and does not need to breathe given its energy-based existence and the fact that it is created in space), the spore will hatch and the being will grow to immense proportions, likely to better consume the energy they require. Because they are made out of energy itself, they are able to spit fireballs as well as convert their otherwise corporeal mass into that of a pure-energy form, rendering it into a ball-like shape that is capable of flight.

An X Spore can be rendered back into its dormant state by coating it once more in guilalium, which will force it to transform back into a spore-tun. This is most likely because they are somehow rendered incapable of consuming or even utilizing energy stored within them already when covered in this substance. They will presumably also revert to their spore-tun state should it ever consume all the energy on a given planet.

Retrieved from "https://aliens.fandom.com/wiki/X_Spore?oldid=181491"
Community content is available under CC-BY-SA unless otherwise noted.