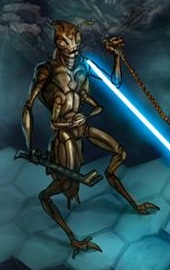 Star Wars
The X'Ting are a species of insectoid organisms indigenous to the planet Ord Cestus. They were originally also referred to as Cestians, but as immigrants flooded to the planet this has since taken on the meaning of any sapient inhabitant. Their species possess three stomachs and a quarter-meter-long stinger which was normally concealed in their abdomen. Males produce a pheromone that often considered unpleasant by offworlders. They spoke a language called X'Tingian and were fond of an art style known simply as chewed duracrete.

Approximately every three Cestian years their species would switch gender, which often led to imbalances in their chemical makeup and causing them to be difficult to read. Luckily for them, they were able to consume food native to the planet Nal Hutta thanks to a similar chemical makeup, and thus the X'Ting could feed upon Viptiel in order to accelerate the uncomfortable transition between genders.

They are governed by the Hive Council, a council of twelve elder representatives located beneath the city of ChikatLik. Each of these twelve individuals represented one of the planet's hives, and they had the power to advise the local regent. The council was to be addressed as "my Lord".

The X'Ting dominated Ord Cestus for a long time, but over the centuries that led to the Clone Wars, the planet's many immigrants, workers, and descendants of former prisoners who had been placed there and had been the bulk attraction of the world overpowered the X'Ting in population, and did even more so once the species was decimated by a plague. By 21 BBY - only 300 years after joining the Galactic Republic, their population had declined to a mere 10% of its former population, with only 50,000 X'Ting remaining, leaving their species as endangered.

At one point they were forced into an allegiance with Asajj Ventress, whom was a threat to them had they disobeyed her, as she demonstrated by vaporizing them with the Force. They finally joined the Galactic Republic when an ARC clone 'brother' of Jango Fett named Jangotat sacrificed himself to kill the Five Families who had ruled Ord Cestus with an iron fist. At this point, the current regent G'Mai Duris - female at the time - declared her planet to the Republic.