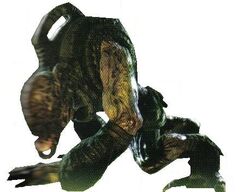 Wretches are members of the Locust Horde and, like them, are natives to the planet Sera. Unlike typical Locusts, Wretches walk on digitigrade legs, and are capable of clinging to nearly any surface. While this ability grants them the useful tactic of surprise attacks, once they spot their intended victim, they will often make their presence known by letting out a horrid, extremely high-pitched scream that can not only force a human to cover their ears and clutch their heads in pain, but it is even capable of shattering nearby glass or certain objects - this is what lends them their name of Wretches. They seem jittery and impatient, and will immediately charge a foe in a frenzy, leaping towards them once close enough in order to rake at them with their scalpel-sharp claws.

Wretches are physically weak to weaponry but tend to attack in large numbers. They are also aided in combat by their naturally hunched stature, which makes them smaller targets to aim for, allowing them to pass behind cover more easily. Because of their numbers, the Locust often use them as a distraction or as cannon fodder. Despite their overall physical frailty, they should not be overlooked or underestimated - they can prove very dangerous to those who forget to look up, and they can easily overwhelm an overly confident foe.