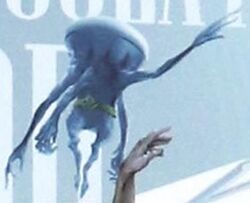 Robert J. Sawyer
The Wreeds are a sapient extraterrestrial species native to the second planet of the Delta Pavonis star system. They made first contact with the Forhilnors somewhere during the 19th century, and became that race's closest allies. Like the Forhilnors, they believe that the universe was created and shaped by a god, and explore other planets seeking clues about the creator's nature and motives.

Like Forhilnors and Humans, the Wreeds are multicellular organisms based on DNA and use the same four fundamental bases and the same twenty aminoacids as life on Beta Hydri III and Earth. Unlike the other two races, however, the Wreeds have 54 chromosomes.

This species evolved from fish-like aquatic ancestors. Their bodies are shaped like an inverted pear, and sustained by a pair of legs. From the upper torso sprout four equally spaced arms: two lateral, one frontal and one dorsal. It is believed that the arms evolved from their ancestors' pectoral, ventral and dorsal fins. The lateral arms have four fingers each; the frontal arm has nine fingers and the dorsal arm has six; totaling 23 fingers. No distinguished head is visible, but there are a number sensory organs on the region of the upper torso, including a mossy black strip which acts like an eye and forms a full circle around the body, giving them 360 degrees vision. A depression on the top of the torso houses the mouth, used for eating and speaking.

Their upper bodies are covered in reddish-brown hair, while the abdomen and the forearms are naked, revealing a leathery bluish-grey skin. Wreeds are viviparous. Their homeworld has weaker gravity than Earth.

The thinking process of this species is fundamentally different from that of Humans and Forhilnors, something which reflects on their extremely complex language, full of intricate links between words, and the excessive number of synonyms for every word, each applicable to a particular context.

Furthermore, Wreeds have an amazing ability to instantly perceive quantity. A Human (or Forhilnor) will instantly know when given one, two or three stones without needing to consciously count them; the same way, the average Wreed can instantly recognize quantities up to 46. Curiously, however, the Wreed is simply incapable of the faculty of consciously counting: when facing quantities higher than 46, they simply have no means to tell the numbers apart, and in fact they don't even have words for the numbers beyond 46.

It is believed that the way the Wreeds think is a result of their anatomy: besides having 360 degrees vision, the Wreed eye is structured in such way to be able to perceive all possible distances with equal clarity; meaning they have no concept of "focus" and "concentration", neither literally nor figuratively. Instead, the Wreeds can only perceive the world holistically, and never think of one thing at a time. Likewise, they are able to intuitively comprehend scientific principles, but unable to conjecture mathematical formulas to explain them. Their logic is intuitive, rather than deductive, but that their intuitions do reflect reality is probably the reason why they have never developed a distinction between science and religion. The Wreeds' mythology reflects the real universe, and while they can comprehend how it works, they cannot explain why.

The Wreeds are known to be naturally shy creatures. They wear no clothing other than a large belt with many pockets. Conversation with Wreeds is often difficult because of their frequent use of poetic analogies and other uses of figurative speech, including rhetorical questions. However, they have no concept of sarcasm. Beyond that, the Wreed language is not organized in linear fashion, but rather has the words mixed in complex orders which are completely nonintuitive to non-Wreeds. Because of that, translator devices must wait for the Wreed to finish their sentences before understanding the meaning and beginning translation.

They are an extremely religious people, and dedicate literally half of their waking time to the efforts of attempting to communicate with God. However, they don't believe God is omnipotent or omniscient and never pray for anything material from him/her/it, merely wishing to stay in contact with the creator. Like the Forhilnors, they believe the existence of God is scientifically proved and unquestionable. In fact they seem to have no distinction between religion and science; possibly because of their intuitive understanding of the world, notions similar to the laws of quantum physics have always been part of their racial mythology.

The Wreeds have an average lifespan of 30 Earth years. As of the 21st century, Wreed population is of only fifty-seven millions; in sharp contrast with the eight billion that is the Forhilnor average population. Morality and ethics are also questions easily handled by the Wreeds, to the point that crime is virtually nonexistent in their society. They are naturally altruistic creatures, who believe in helping others whenever possible.