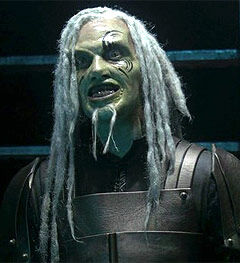 Stargate Atlantis
The Wraith are a race of sadistic sapient humanoids. They are vampiric and use humans as their primary food source; travelling across their home galaxy in their great hive ships, they hibernate for long periods of time and return periodically to cull their human herds living on the planets of the Wraith home galaxy.

The Wraith are bipedal, have a humanoid body shape and greatly resemble humans in appearance, but have pale blue or light green skin, yellow eyes and white, black or red hair. Even though they resemble humans externally, they are genetically more similar to insects than mammals. They are a caste-based species, each caste having distinct physical differences and fulfilling a different function in the Wraith society. They are predominantly male, the only observed females being the Wraith queens, the leaders of the species. Wraith sexual dimorphism is similar to humans. Below the queens are various other castes, including male "soldiers" and "leaders". These lower castes are much less intelligent than the queens (with the soldiers being noted as unimaginative and possessing rigid thought patterns), with the male "leader" caste as an apparent exception.

The Wraith use the 'life-force' of humans or similar species for nourishment. The process causes the victim pain and has an effect similar to rapid aging. Wraith drain life-force through a specialised organ located in the palm of their right hand. The draining is accomplished by slamming the hand onto a human being, typically on the chest over the heart. The Wraith's nails then puncture the victims skin, and the draining organ begins to absorb the victim's life-force. This is depicted in a manner that could be likened to sipping a drink through a draw. Throughout the process a special enzyme is injected to the victim's bloodstream. This enzyme strengthens the victim's body and keeps the heart beating, thus ensuring that the victim does not die from the trauma of life-force draining until the Wraith is finished feeding. Without the enzyme even a partial draining could be lethal to a human.

The Wraith are also able to inject life force back into a human. This has a reverse effect to draining, making the victim stronger and younger-looking. The re-injection of life-force, called "the Gift of Life" by the Wraith, can be used even to return the recently dead to life.

The Wraith are strongly telepathic, and though they do possess vocal chords, their primary means of communication is telepathic in nature. All Wraith are connected in a telepathic network of sorts, allowing quick communication over vast distances. The Wraith can also use their telepathic abilities to create illusions, making resemblances of shadowy ghosts appear in the victim's field of vision. Stronger Wraith can exert stronger telepathic control over the minds and bodies of other beings, for example forcing them to kneel or implanting suggestions in their minds. The Wraith queens are the most powerful telepaths of their species, and are quite capable of disarming enemy military personnel by forcing them to drop their weapons. They are apparently able to kill sentient beings with thought alone.

Wraith technology is organic in nature, and is grown rather than manufactured. This is done by introducing a microbial organism known as Wraith pathogen into the system of a human host. The pathogen infects the host, assimilates its body and pushes out tendrils that search out and break down raw materials as they spread over an area, eventually growing into whatever structure they are meant to become.

Retrieved from "https://aliens.fandom.com/wiki/Wraith_(Stargate)?oldid=194935"
Community content is available under CC-BY-SA unless otherwise noted.