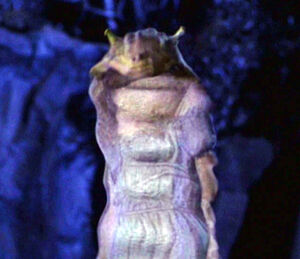 About 2 meters long in their natural form

Star Trek
The Wraiths are a sapient, telepathic race of shapeshifting creatures native to the rogue planet Dakala. Their true form is similar to an elongated sea slug, but they are able to take the form of any other creature. They may also read the minds of those around them and assume a familiar form, such as when Captain Archer encountered a Wraith in 2151 which appeared to him in the form of a Human female.

The Wraiths are not a spacefaring species, and appear to have no technology of any kind. Instead they simply inhabit the jungles of their homeworld. The Eska, a race of humanoid hunters, do not recognize Wraiths as sapient lifeforms and usually hunt them for the challenge, much like a Yautja would do. Originally, the Wraiths were able to defend themselves and even kill several Eska. Eventually, however, the Eska developed a sensor capable of reading the beings' chemical signature. Fortunately for the Wraiths, they made contact with the Human starship Enterprise NX-01. The ship's doctor, Phlox, developed a compound that could mask the Wraiths' chemical signature, thus enabling them to hide from the Eska and turn the game once again.

Retrieved from "https://aliens.fandom.com/wiki/Wraith_(Star_Trek)?oldid=192929"
Community content is available under CC-BY-SA unless otherwise noted.